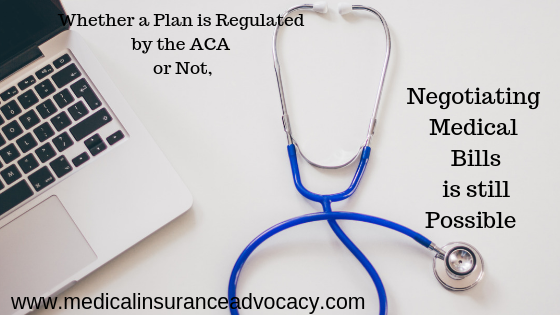 Taking care of our health can be a costly endeavor. The ability to pay can become a matter of life and death if bills rack up over long term care that falls into collections. That is why having insurance is so important during unexpected emergencies or when someone has a chronic illness. Medwise Insurance Advocacy, your medical bill advocate, has been negotiating with companies that offer health “cost-sharing” that is not regulated by the Affordable Care Act because of a religious exemption for over 10 years. Prior to the ACA, health plans with exceptions and unique clauses that could deny care were common, having to negotiate medical bills is nothing new in the industry.

Faith based health sharing like Christian Ministries, Altura, Christian Healthcare Sharing, Aliera, Medi-Share, Samaritan Ministries are just some of the companies that managed to operate outside of ACA regulations enacted in 2010 and have increased revenues in the millions. For example, Christian Healthcare Ministries had over 444 million in revenue on their 2018 taxes. When these organizations started in the 80s they were based on people submitting a medical bill to a group and then members sending them money with a note of prayer to get better. Now, these organizations have executives that take home over 6 figures. Enrollment has gone from less than 300,000 members to over a million members in different groups as popularity surged to avoid the high cost of healthcare plans and membership satisfied the federal healthcare requirement. However, membership in these organizations is not tax-deductible as health insurance.

The companies offering medical cost-sharing do not refer to themselves as a health insurance plan, they’re not and the coverage that they offer cannot be regulated or enforced by the state within laws that apply to “Healthcare Plans”. Rather, it is considered “cost-sharing” and some state insurance commissioners are working to ban the sale of these investments because of a lack of oversight and false advertising. The insurance commissioner in Washington was successful in blocking further sales of Aliera Healthcare and Trinity healthshare but the commissioner in Texas was blocked from stopping the sale of these plans by a lower court judge. These companies are growing and having to cover health costs faster than states can catch-up in trying to oversee the companies and then there are states who are trying to protect them from oversight while trumpeting religious freedom.

These companies regulate themselves and when a person receives a denial for care the only recourse is to appeal to the company directly, a state cannot force coverage because of the contracts that are made between the negotiating parties. When signing up for a cost-sharing plan, buyers must beware of what they are actually getting. Many of these organizations require members to be of a certain faith, but as interest has expanded, faith requirements have been lax. One of the highlights to these investments is the ability for an organization to not cover abortions, family planning, mammograms, mental health care, or addiction treatments because the practice does not align with their faith and are automatically denied. Medical bill advocates see that these plans are advertised as being lower in cost with more choice on what you are supporting with your investment. It can lead to confusion as small businesses start joining these organizations and then lump their employees into these plans that do not have similar religious beliefs and then need family planning services.

Through executive order, associated health plans are now entering the healthcare market and like other cost-sharing companies, these associations come with similar restrictions and risks in actually getting approved for coverage. Again, they are not regulated by the ACA, they are formed from companies and associations that share similar beliefs or industries and oversight is limited by states and the federal government. The buyer has a higher responsibility to know what they are buying into. It is important to know if the associated health group has the liquid funds to actually pay for the services that they claim to cover. These plans can take on new members and then not have the funds necessary to actually cover care. Like the religious cost-sharing organizations, there is no outside recourse.